Already from the airplane it can be seen in the west, the 69 metres high, shining white statue of Wat Huay Pla Kang – called big Buddha Chiang Rai.

The statue was built only a few years ago and is already a very popular destination for tourists from Thailand, China and the western countries. The complex is still under construction, but in the meantime a white temple and the Chinese pagoda have been completed in addition to the large white statue. The abbot Phra Ajahn Phok Chokthisawaso started the construction of the temple in 2005, which was recognized by the Office of National Buddhism in 2009.

The white statue of Guanyin

Buddha statues in Thailand often have a gentle and almost androgynous face. Also here the face appears rather feminine. No wonder, because it is actually a statue of Guanyin, the Chinese goddess of mercy.

In Thai Buddhism, Guanyin (sometimes written Guan Yin) is a Bodhisattva, that is an enlightened person who has continued to help people on their path to Nirvana. The goddess is a compassionate being and responds to prayers that ask for help. Which explains why the statue attracts so many Thai people. For foreign tourists the widely visible location on the hill and the special design in Chinese Lanna style are the most significant factors.

From the parking lot you can either walk up the large staircase bordered by nagas or take a small shuttle bus to the entrance of the statue. Already from there one has a great view. With an elevator for 40 Baht one reaches the inside of the head. Unfortunately the staircase is closed, although it would be very attractive for me from a sportive point of view. Chinese dressed ladies and crazy stucco decorations welcome the visitors when leaving the elevator. The view through the narrow eyes or small windows at the back is impressive.

The 9-storey Chinese pagoda next to it is striking. The construction is said to have taken 999 days. You have to know that 9 is an important lucky number (number plates with 9999 were sold expensively or even auctioned in the past), which fits well to the story of the abbot’s dream. Phra Ajahn Pokchok dreamed of the building and a short time later a donation came from Taiwan for exactly this pagoda.

Inside there is a large wooden guanyin statue. I stood in front of it and tried to imagine how big the tree must have been from which this statue was carved. Or is it actually composed of several pieces?

There are more, but smaller wooden statues of the goddess in the galleries. 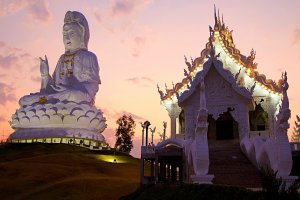 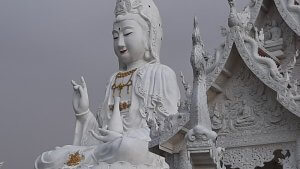 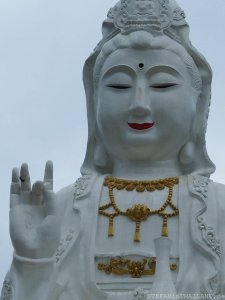 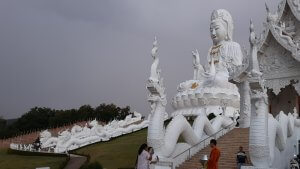 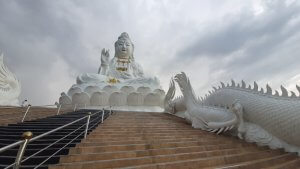 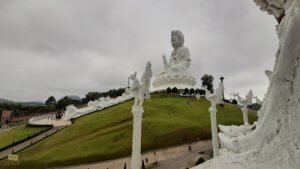 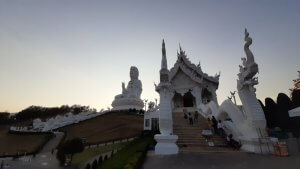 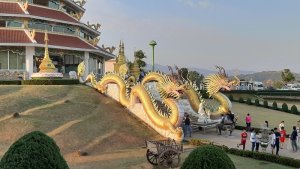 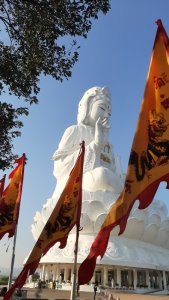 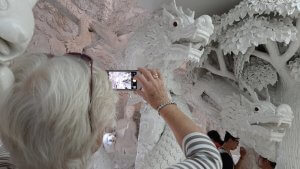 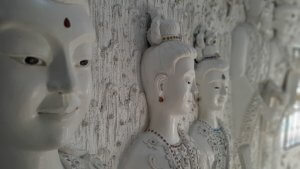 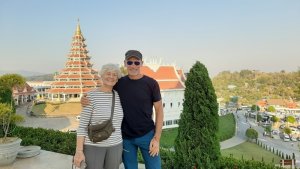 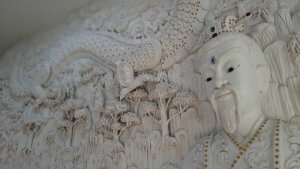 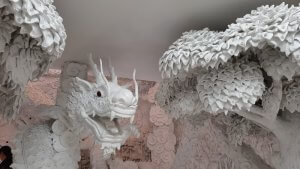 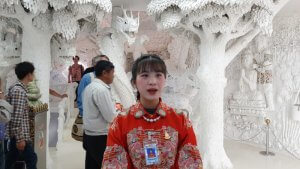 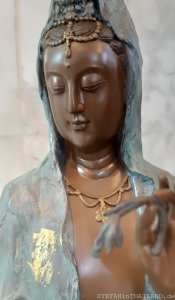 My tip for a trip to the temples in Chiang Rai

Get your Guide offers excursions with English speaking guides from Chiang Mai. The visit of the White Temple and Black House is combined with the Big Buddha in one day. So you can easily enjoy a tour to the best sights of Chiang Rai. 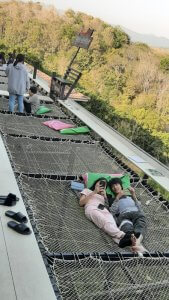 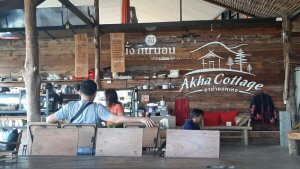 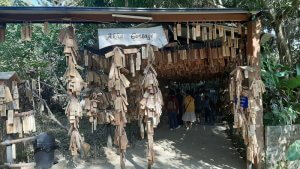 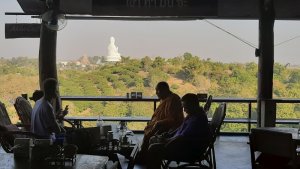 Suggestions for appropriate behaviour in temples:

You would like to support my blog or say thank you? Invite me to dinner with credit card or PayPal. Thank you very much!